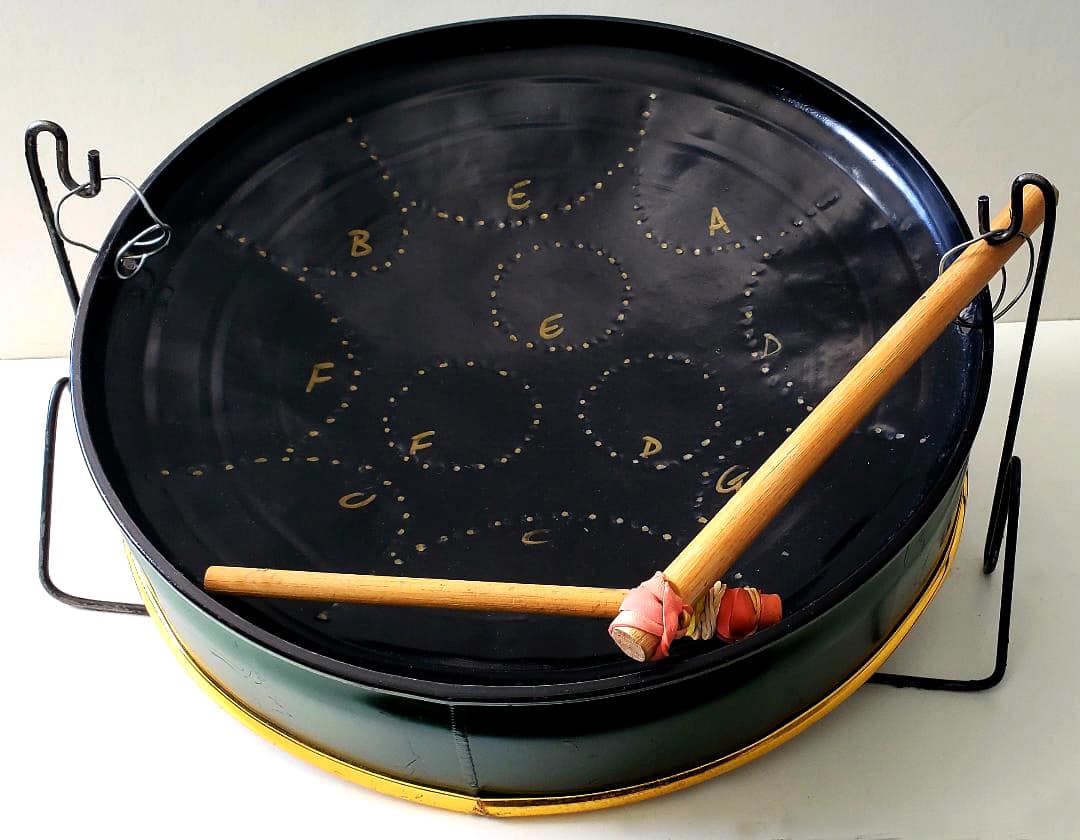 Meaning to them: “The Steelpan is a musical instrument that is synonymous with the West Indies, carnival and Caribana. A treasure reflecting cultural heritage and artistry.”

How to pass it on: The Steelpan is shared through carnival, musical avenues and instrument players.

Steel pans (steel drums) were created on the Caribbean island of Trinidad in the 1930s, but steel pan history can be traced back to the enslaved Africans who were brought to the islands during the 1700s.

They carried with them elements of their African culture including the playing of hand drums. These drums became the main percussion instruments in the annual Trinidadian carnival festivities.

Early mental pan bands combined a wide variety of metallic containers and kitchen utensils which were struck with open hands, fists or sticks.

The metal pan players discovered that the raised areas of the metal containers made a different sound to those areas that were flat. Through experimentation, coincidence, trial and error, and ingenuity on the part of numerous innovators, the metal pan bands evolved into the steel pan family of instruments.

As the pan makers knowledge and technique improved, so did the sound of the instrument.

The history of steel plan in Toronto is perhaps most well known or recognized through Caribana festival.Toronto’s Caribbean Caribana festival has grown exponentially since its start in 1967 when it first began and is currently North America’s largest cultural festival. What was once a three-day event has now grown into a three week celebration, absorbing most of the city with its infectious feel-good vibes. The steel pan is the musical instrument that plays a starring role in the festivities and is about showcasing carnival music, culture and art, which includes costume marking and playing steel plan.

Previous Project | Next Project
Back to Treasures of Ours

Megan Sue-Chue-Lam is an educator who has designed, facilitated, and evaluated programming for a number of arts and culture organizations. She holds a Bachelor of Arts Honours and Bachelor of Education from Queen’s University and recently completed a Master of Museum Studies (MMSt) at the University of Toronto. Megan is a lifelong learner whose current focus is on centring BIPOC and other minoritized perspectives in the arts and culture sector through community engagement.

Jacqui is a registered social service worker and socially-engaged artist who maintains a collaborative, conceptual and context-specific practice. She holds a BAH in Continental Philosophy from Queen’s University and a Community Worker diploma from George Brown College. Activating this educational background, she uses the arts as a tool to critically examine social issues and catalyze civic engagement. She has worked with numerous community arts organizations including Artscape Youngplace and 918 Bathurst Centre for Culture, Arts, Media & Education. As co-director of an interdisciplinary collective focused on interactive and participatory works, she has produced projects for public art events including NXNE Art, BIG on Bloor, Art of the Danforth, Culture Days, 100in1Day Toronto and The Laneway Project. Jacqui loves public art, politics, books and sunshine. Drop by the Community Project Space to say hello!

Ivan is the Manager of the Petroff Gallery one of Toronto’s oldest commercial art galleries. The gallery presents emerging contemporary fine artists alongside some of North America’s best craft makers. In addition to ensuring the continued success of the business by working closely with artists and clients, Ivan spearheads growth by implementing new and innovative technologies. Leveraging technology in support of artists led Ivan to found his own arts consultancy. Ivan Tanzer Art Services provides artists at any stage of their career with customized technology solutions and a roadmap to achieving their goals. A South Etobicoke resident, Ivan joined the board to bring his passion for the Arts, his technology skills, as well as his wide-ranging arts management knowledge to the LSA community.

LSA allows me to help serve and connect with the community I live in. I believe that access to Art is a key component to a healthy and happy life.

Jenneen Beattie received her BFA from OCADU, and participated in a studio placement at the Winchester School of Art, UK. She graduated with Honours from Humber’s Arts Administration and Cultural Management postgraduate program and interned with the Toronto Biennial of Art exhibitions department. Currently, she programs community-engaged public art with Mural Routes.

As a South Etobicoke resident, I would like to contribute to the LSA and support the great work they do for my community.

Linda Hill has worked in community services since 1986 and is formerly Executive Director of Richview Community Care Services. She is a registered social worker and Professor in the Faculty of Social and Community Services at Humber College. Her teaching areas include community development, agency administration in the non-profit sector, program development and evaluation, proposal writing and participatory action research. She is passionate about social justice and transformational pedagogies that include arts-based approaches to teaching and learning. As an educator, she weaves practice-based projects into theory-based courses, opening doors between the classroom and the community.

I want to contribute to an organization that values social justice and creates positive community space.

Kathy Dimas, is a passionate Artist. As a trained Dancer in Ballet she has performed in classical ballet, Latin folklore and modern Latin dance. Her love of art started with the visual arts and continued with photography. It is through her love of the arts that has taken her to volunteer as a dance teacher for the youth and to get involved as a board member with Lakeshore Arts. She is a Professional Accountant with over 17 year experience. She is a board member acting as Treasurer and sits as top management for profit and non-profit organizations such as University of Toronto Schools and Foundation.

For the Love of the Arts and how the human spirit is reflected and celebrated through it many forms.

Amanda is the executive director of the Toronto Inner-City Rugby Foundation (TIRF), Toronto’s only rugby-centred sport for development organization. As a recovering fundraiser, Amanda brings 20+ years of integrated marketing communications experience in addition to nearly a decade of experience focused on building capacity for youth-serving organizations. Prior to joining TIRF, Amanda worked in broadcasting, sponsorship, event planning, and non-profit consulting. A self-described “non-profit nerd” she continues to support grassroots groups and projects through her work as a co-founder of The ReDesign Group.

Giving space and amplifying the collective voice of the community is the demonstration of being just. Being able to do this through the LSA board is an absolute privilege.

May studied Canadian communities, works with new immigrants to Canada and has been involved in the arts in her experiences in stylist work, TV and music.  She has a new interest in Lakeshore Arts because of its commitment to improving availability of the arts.

I joined LSA to help give youth opportunities and a safe space which encourages self expression. I benefited from the Arts and would like the same for youth in need.
Executive Director

Ashley Watson is an arts manager, educator and fundraiser. Perviously she was the Development Officer at the Royal Botanical Gardens and has worked in fund development and partnership cultivation roles at Lakeshore Arts. She was the inaugural Curator for Humber Galleries where she managed two gallery spaces and was responsible for starting a contemporary Canadian art collection. She has also been a sessional and guest lecturer in the Arts Management program at the University of Toronto, Humber College and the University of Guelph. Her professional experience is supported by her academic studies with a BA in Arts Management from the University of Toronto and an MFA from the University of Leicester in Art Museum and Gallery Studies, during which she was awarded the Community Leadership Prize. She also relishes her time spent in the garden and hiking with her pup Hector.

Hector is a sweet, fun loving pup, who is a favourite around the office here at LSA. At only two years of age, he is already taking on the world and strives to one day become a certified therapy dog. For now, though, he is happy spending his days cuddling up to all those having a ruff day.